The rugged mountainous country above this bridge experienced very heavy rainfall over a number of days prior to January 10th 2011, and on that date, the water level reached to within 14 feet of the bridge deck (9 feet above the 1893 flood), and the force of water against the piers was causing a surf like spray around the structure. Unfortunately, this torrent reached the Helidon, Grantham and Gatton areas later in the day, where there was sadly loss of life. Combined with loss of life upstream in Murphy's Creek, I am very much saddened by this event, and would like to express my sincere condolences to relatives and friends.

The information below is published in good faith for the interest and use (not mis-use) of those genuinely interested in the geographic or engineering consequences of the horrific rain-caused flooding of 10 January 2011.

The picture below was taken by the Queensland Railways around 1915, and was taken from the western or downstream side of the bridge. The junction with the Alice Creek is behind, and about 1km around a corner to the left. This photo was taken sometime in the 3 to 4 years after the completion of the "new" ferro reinforced concrete bridge. The photo has been scanned from a Railways publication of 1915. 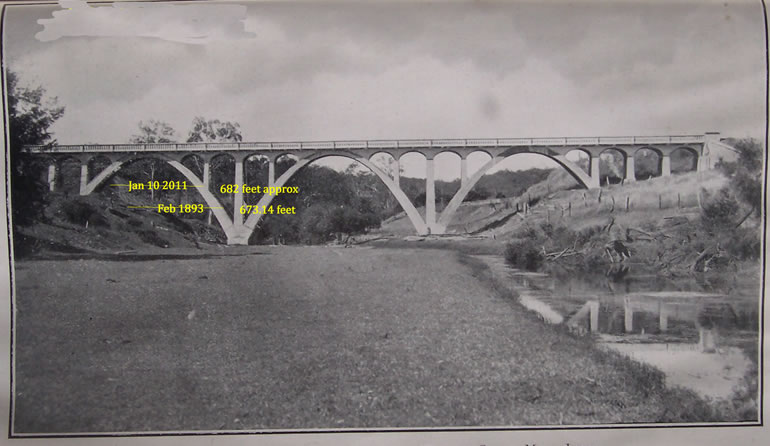 It is interesting to note that in 1915, the creek banks on this side are relatively clear of vegetation. Such was not the case when I visited in 2008. Google Maps and others of that period show considerable growth of both trees and watercourse shrubs. I did not make notes at the time, but the vegetation from memory was a good mix of calistemon viminalis, melaleuca bracteata, casuarina and large eucalypts.

The 1893 flood levels are shown on the 1910 railway engineering plans of the bridge, which I have in my possession. The level shown for the 1893 flood, is 673.14 feet above sea level. Railway surveyors will be able to relate that to the modern Australian Height Datum.

The 2011 flood levels were taken from a video of the flooding which is public on Youtube. The estimated 2011 level on that basis, is 682 feet above sea level, or 9 feet higher than 1893. The video shows clearly that the flooding peaked at 2.21pm on the afternoon (AEST) of 10 January.